For this year I have a rather boring photo project in mind.I want to concentrate a bit more on traditional art and post old photos, so I decided for a small photo project.

Each month I’ll post a photo of a flower fitting the month here, it doesn’t have to be real flowers as seen in the January entry. I’ll also update this text to write some information about the photo 🙂

January: I took this photo when I was at the Hakeburg on a photo tour. In one of the rooms all windows had frost patterns on them. It was then that I decided to go through with my project. I wasn’t so sure before, because the photo of a frost pattern I already took didn’t really flash me. But this one I liked since it looks a bit like a flower bending to the left.

Fabruary: My sister visited me on the last weekend in February and we went to the Berlin-Dahlem Botanical Garden. I took the photo after went through the greenhouses with all kinds of flowers and shrubs blooming. In the park were a few spots with snowdrops, crocuses and other early spring bloomers. Since childhood snowdrops are one of the first flowers blooming for me, so I chose this one. 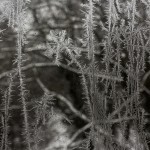 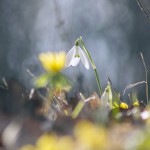