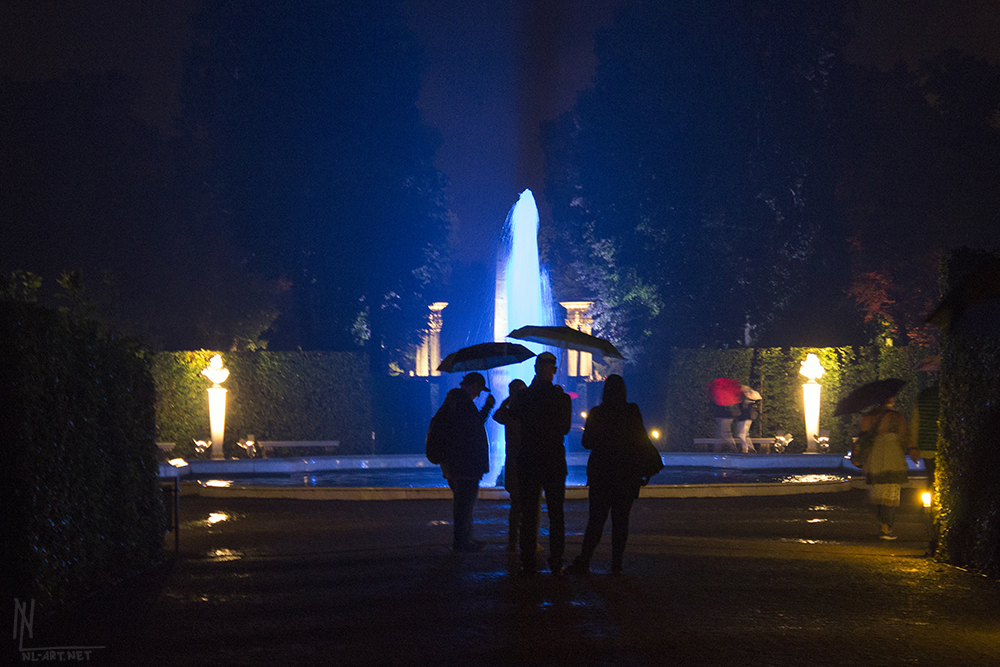 Last Saturday a friend and I went to the Night of Palaces (‘Potsdamer Schlössernacht’). Unfortunately it rained and then it poured down on us, so that we were quite wet even though we had umbrellas… but the rain got into my shoes nonetheless… even though we made the best of it and wandered around.

We didn’t see a lot of people, who dressed up because of the bad weather. I also had the feeling that there was less action than the last years. Whenever we wanted to visit a palace the queue was so long it wasn’t worth it. What do people do when it rains? they seek shelter right… in this case it were the palaces…

We did get into the Chinese House, which was cool, since I haven’t been inside of it yet. At the moment there’s an art project in the Chinese House. The Berlin artist Tina Cassati was inspired by the Chinese House and the decoration for her project “Giardino di Arte” (Art Garden). You can see dresses in the side rooms that scream opulence. Made of artificial flowers they go nicely with the floral wallpaper.

The rain was bad that day and I didn’t have my tryipod with me, so the photos you see of that evening are shot right away, thus the quality is not the best. I wanted to have a nice evening with a friend without carrying around my photo stuff. It would have been okay, even though it rained, but they rescheduled the firework… one hour earlier, we didn’t know that, so of course we didn’t see much and even worse after the firework they closed the palaces and the catering service wrapped things up… we lost one hour, not cool, badly organised!

The Protestant Church of Peace