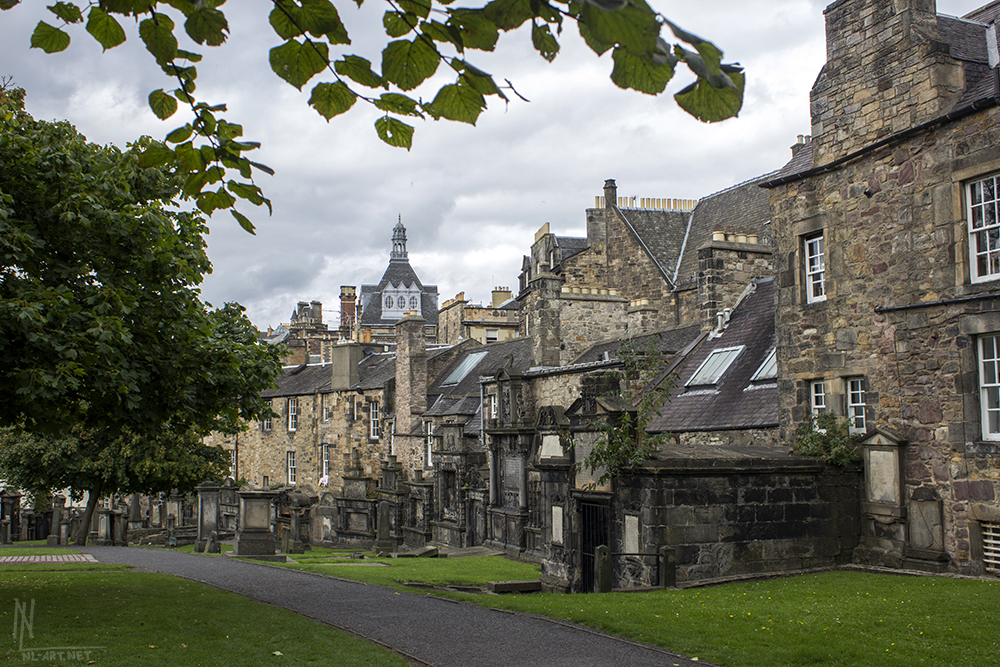 The Sky Terrier ‘Bobby’ is well known in Edinburgh and throughout Scotland. It is said that after his master, John Gray a watchman, died he visited his grave every day for 14 years until he died. This was well known in the city and so they placed a statue of ‘Bobby’ in front of the entry to Greyfriars Kirkyard in 1872.

Greyfriars Kirkyard is the oldest graveyard in Edinburgh, it still has part of the original city wall and was an inspiration for J.K.Rowling and her Harry Potter books. The kirkyard was founded in 1561. Some of the graves have names of Harry Potter Characters thus a lot of people come to the churyard looking for those names others came and ruined the one which names they didn’t like. We more or less found some of the graves by chance.

In 1679 Edinburgh needed room for prisoners so they used a field in the kirkyard. Later it became additional burial grounds, which is now sealed of but can be visited on so-called Ghost Tours. The area is also surrounded by the Flodden Wall, which was once the new city wall to guard against the English and keep smugglers in control. The churchyard is surrounded by houses most of them are student homes.

On the Churchyard some very interesting graves can be found as well as memorials. Next to the church are iron sealed graves, so-called mortsafes. They were erected to prevent grave robbers to dig up the body for sale to anatomy classes.

There were lots of very old graves that caught my interest. Most of them have some great masonry work done. Plenty of different skulls can be found. Also a grave of a Mr Tod (in English ‘Death’), who was an advocat… I wonder what happens if Death (“Tod”) is dead?