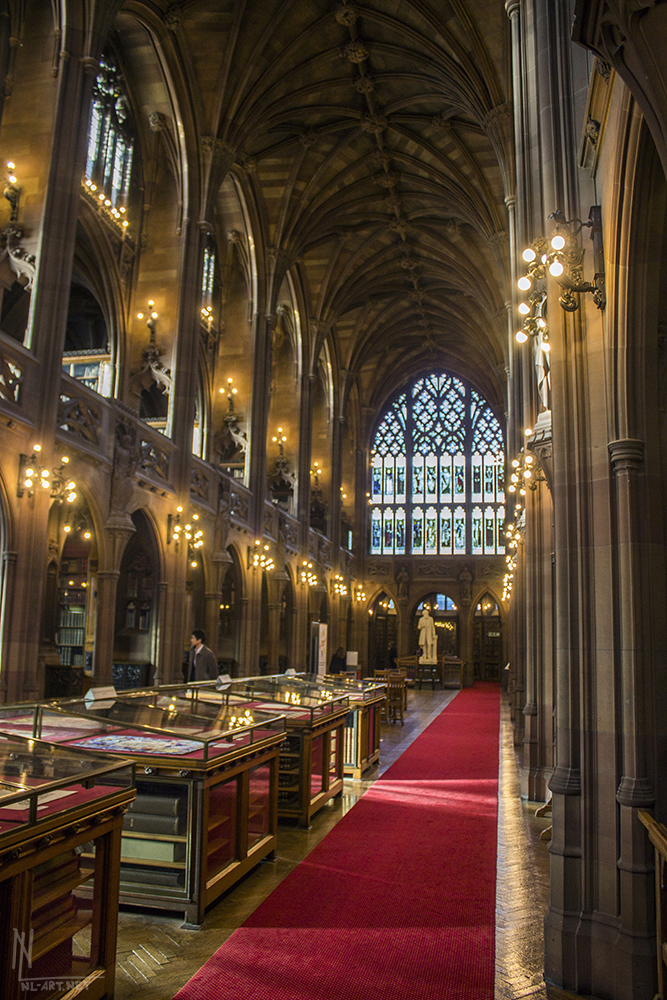 Should you visit Manchester I advise having a look at the Chetham’s Library and John Rylands Library. The libraries are amazing.

On our first day in Manchester we went to the Chetham’s Library just before it closed. A very nice lady guided us through the library and told us some stories about the building. For example that it is the oldest building in Manchester and the oldest still open library in the in the English-speaking world. It was built in 1421 for priests, later used as a boarding school for boys, a prison and a weapons stash. In 1653 Humphrey Chetham changed everything by buying the building. He stated in his last will that it should be used as a boys school and as a library – open for everyone. This was a novelty in Great Britain at that time. The library houses lots of old books and manuscripts and is still in use.

The atmosphere inside is very special. Since the building is very old, the interior is quite dark and mysterious, wood paneling covering the walls and there are book shelves everywhere, it smells heavenly for a lover of old paper and history.

By the way Friedrich Engles and Karl Marx also visited the library and were quite fond of it. They liked the atmosphere too.

The official website is worth a visit too: www.chethams.org.uk

The library was commissioned as a memorial for John Ryland by his wife. John Rylands was a very rich industrialist, who died 1888 and left quite a fortune. His wife decided to built this library to to make his private book collection accessible to the public. The library shelters most of the valuable book collections worldwide, among the precious books is a Gutenberg bibel and the oldest fragment of a New Testament text, which was created in Egypt and dates back to 125 ad.  It opened it’s doors to the public in 1900.

I found the arichtecture so much more interesting. You enter the library through a very modern concrete and glass building and after using the elevator you step into a very different building. Basil Champney designed the library like a cathedral with the library hall looking like a nave with columns and glass stained windows. The statues of Mr and Mrs Rylands stand on either side of the huge hall. The John Rylands Library is late-Victorian neo-Gothic and when entering the library hall it is like stepping into Hogwarts. All the way down the beautiful staircase one can find the original Victorian toilets. These toilets are unchanged since 1900.

The new building houses a Café, a gift shop and is the entrance to the library. The Café is definately worth a visit, I can recommand to try the Afternoon Tea there, the scones were the best I ever had!

More information on the library can be found here: www.library.manchester.ac.uk/rylands